Towards the sixth week I started to get a painful rash under my arm. I had a rash under my breast too but it was not painful. I was given lidocaine ointment to mix with silvadene cream to put on 3-4 times a day. I now have four different kinds of ointments and lotions on my left breast, depending on the area. From the beginning I was advised to put Aquaphor on the nipple at night, and Miaderm lotion all over three times a day, but not four hours before treatment. Miaderm is very expensive. I paid over $30 for one tube. Luckily it was all I needed.

I practically begged the doctor to stop this sooner but apparently the magic number is thirty-six. Ugh. Seven weeks and a day.

The last eight days I am given a “booster.” This booster goes specifically over the tumor area, not the whole breast area. When you enter the room, you only need now to expose your affected side. The marks I had were no longer needed and taken off. The tech uses a template. This template is aligned with your tattoos if you have them or your nipple. There’s holes punched out along the template perimeter. She takes a pen and dots the template onto your skin. The table is then raised to meet a different kind of machine.  This one has what reminds me of a developer lens in photography class (old school, not Photoshop). Inside this square gray lens is a metal slide with the template cut out, matching the one now inked on my breast. The light coming through this “lens” matches the perimeter of the template. It doesn’t make the same high-pitched noise. I count for 24 seconds and it’s all over. 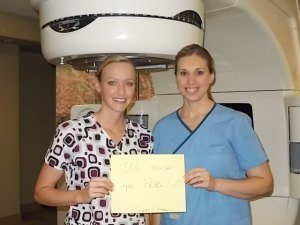 A special thanks to Kriste and Erica for helping me through this.You two were great.

On my last day, the girls tell me that they felt I was able to really wrap my head around getting radiation. We joked about my few grumpy days I came in but they were quick to say that I did always have a smile for them.  It made me feel good to hear them say that.

Last week the cubbies had only three names. Sadly,this week three more names were added. But on 5/8/2013 – it was one less name – mine!

Links to the entire series about Patti’s battle with cancer listed below:

Care to pass the word?

Let your mind explore books, but let yourself explore the world.

Life in the dunes along Lake Michigan

While They Are Kids

Fun things we must do while they are kids!